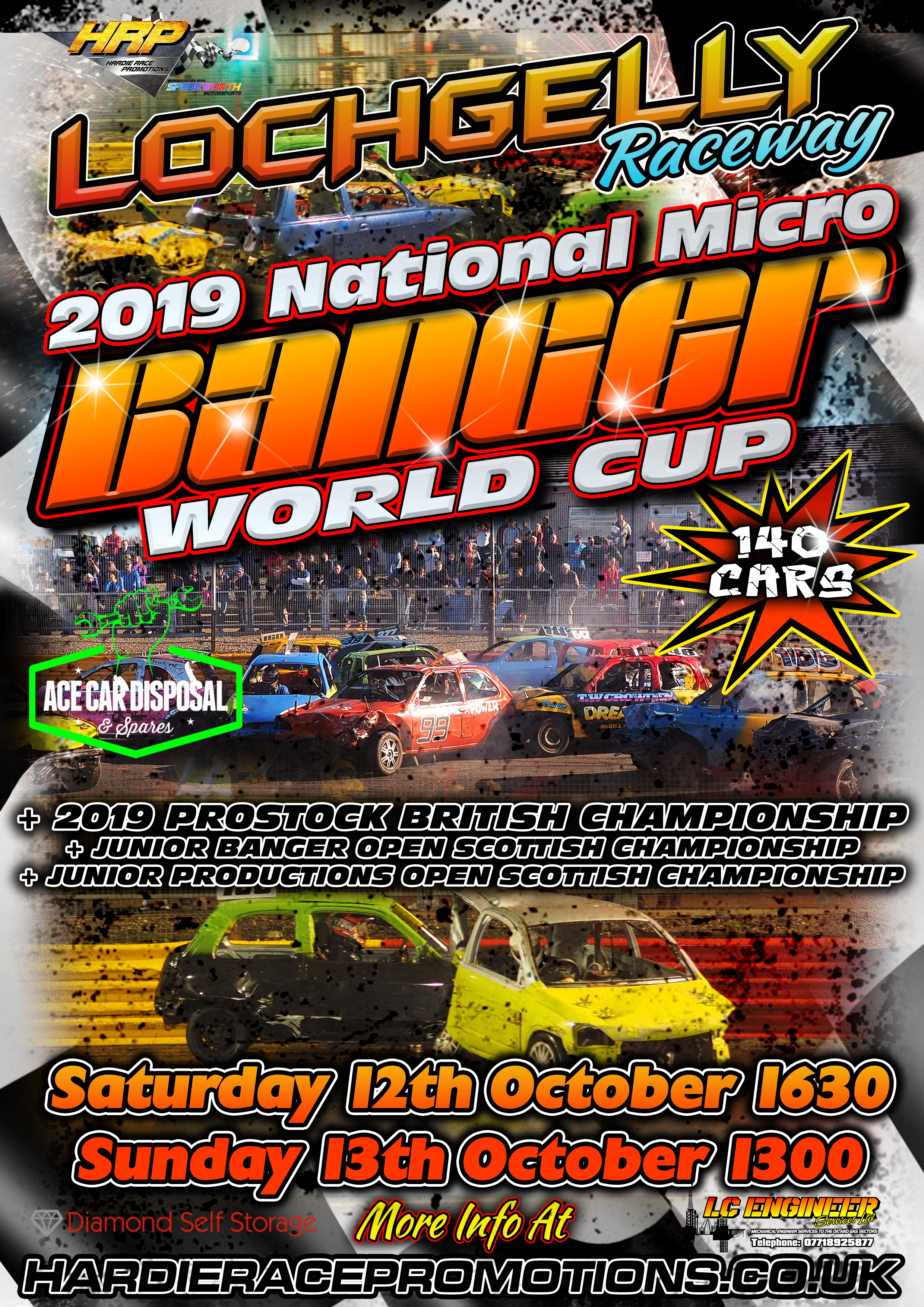 The time is almost upon us for what promises to be one of the biggest banger events Scotland has seen in the 21st centuary. With upto 140 Micro Bangers booked to compete at the Ace Car Disposals Micro Banger World Cup weekend, and a healthy grid of Junior Bangers, ProStocks and Junior Productions, it's shaped up to be a lively event!

Josh Vowden has won the Micro Banger World Cup each of the last 2 years - can he make it three years in a row?? With a change to the way that the event has been run over the last couple of years, we will see 2 last chances take place with upto 50 cars in each of them with only the top 7 making it through to the main event - we already have just under 40 seeded entries for the World Cup race itself; This will mean that the the World Cup race should have over 50 cars on the grid, where an Incarace style draw will determine the starting line up for the race itself. As well as the World Cup up for grabs, there are a number of entertainer awards on offer throughout the weekend, which could see a number of drivers go out to try and get those awards, rather than to win.. which could result in some very entertaining and eventful races!! The Sunday will see the Micro Banger Open Scottish Championship up for grabs, with all cars being eligible for the races on Sunday, it could be a present a massive field of cars! The Micro Bangers will round out the weekend with a Demolition Derby event to finish the weekend in style!!

The Junior Bangers will have the biggest field of cars that Lochgelly Raceway has seen from the formula in it's history, with around 25 Junior Bangers expected to be in attendance as they battle it out for their Open Scottish Championship on Saturday, and their Fife Championship on Sunday; Historically, the Junior Bangers have provided some excellent racing and although not strictly a full contact formula, always provide on track entertainment!

The Junior Productions will be racing for their LC Engineer Open Scottish Championship on Saturday and Diamond Self Storage Fife Championship on Sunday. With a host of visiting drivers, as well as an array of our own drivers, there looks set to be between 15 and 20 cars on track for the weekend. Enough, to certainly put on a show over the 2 days. The youngsters have blossomed here at Lochgelly this year with a steady increase in car numbers throughout the year as the formula continues to grow. The Northern Irish drivers though, seem to have the pace and will be looking to take the honours across the Irish sea this weekend!

The ProStocks are with us at they race for their British Championship. A few Northern Irish drivers are making the trip over to join us for the weekend and will be looking to take the British Championship across the water with them upon return. Our Scottish drivers though, will be doing their utmost to ensure the title returns to Scotland. Around 20 cars are expected to be in attendance for the ProStock formula. The Christopher Burke Memorial trophy will be up for grabs on the Sunday afternoon for the ProStocks.

The CC Rods join us on Sunday and will be racing for the Bill and Ciaran Hawkes Memorial Trophy. The CC Rods have had some excellent races of late, with a host of new drivers joining the formula and stepping up quickly, making it more difficult for the star grade drivers to come through and claim victories.

The 2019 National Micro Banger World Cup, sponsored by ACE Car Disposal and Spares is the headline event of our FOURTH speed weekend of 2019, 12th and 13th October 2019

Alongside the Micro Bangers, the ProStocks will be competing for the British Championship, whilst the Junior Bangers, Junior Productions and CC Rods complete the line up across the two days.

CC Rods are Sunday only.

Event Guide
- Spectator gates will open at 1300 on Saturday 12th October and at 1130 on Sunday 13th October
- Drivers will be able to arrive at the venue from 9am on Saturday morning. Drivers will be able to sign in from 1130am.
- Practice will take place from 1500-1530 and will only be open to ProStock formula and Junior Productions
- The racing will commence at 1630 on Saturday and 1300 on Sunday.
- On the day wristbands can ONLY be purchased from the main reception. There will NO wristbands sold from the drivers' sign in office.
- 2 covered areas to keep you sheltered whatever the weather
- Trackside parking available on a first come first served basis.

There are almost 140 Bangers booked into race and ready to put on an excellent showing across both Saturday and Sunday! The lists can be found below for the formula that are racing both days at the speedweekend (Correct at time of publication)

It is expected that 7 cars from each last chance race will qualify - this figure may change dependent on numbers on the day.

Please note - Hardie Race Promotions cannot be held responsible for the non attendance of any driver. We publish lists and numbers in good faith that drivers will honour the bookings.
Running orders subject to change.