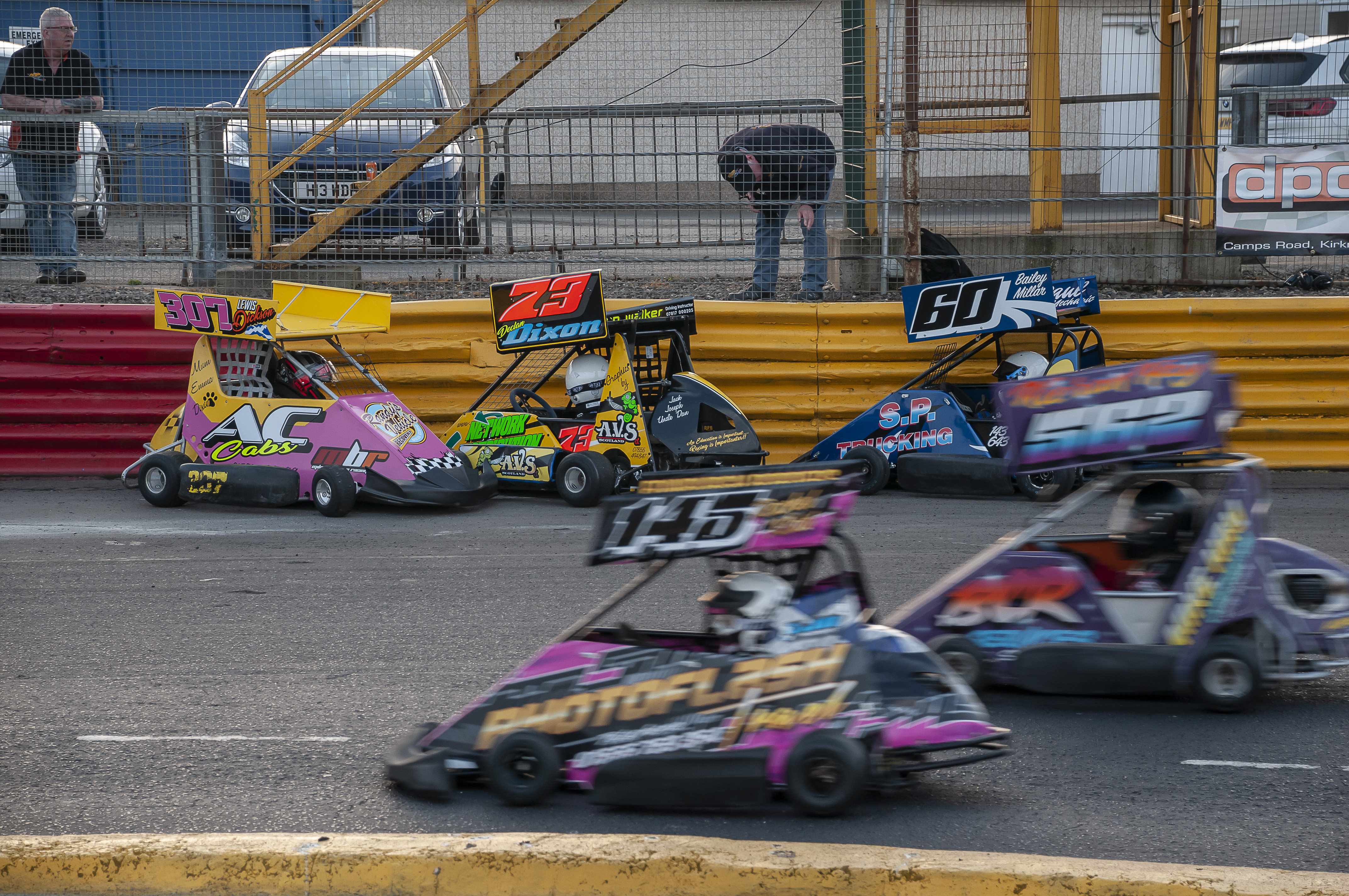 We’re back in action with a fantastic five formula line up featuring the fearless Ninja Karts, Scotland’s most popular open wheel formula in the Superstox, plus Junior Productions, Stock Rods and ProStocks.

The Ninja Karts are back in action for the first time in over a month at Lochgelly Raceway and almost 30 karts are booked into race, including 2 visiting drivers, Jake Shelby and Calum Gould. It’s the final meeting on home turf for Charlie Hardie and Rachel Kidd before they move on up to Ministox after the summer break, with Bailey Millars time in the formula drawing to a close in a couple of month’s as well. The BBC will be joining us on Saturday to do a spot of filming, with Rachel and Charlie both getting a few laps in the Ministox pre meeting as well, for the cameras to show how progression can be made from one formula to the next. Hardie Race Promotions are proud of such talent that continues to evolve from the Ninja Kart class. HRP wish all of the drivers’ moving on, good luck in the Ministox (or Junior Productions).

Calum Gould will be looking to make the trip north worthwhile as he bids to leave with some silverware. Calum was in fine form at the Speed Weekend back in April and will be hoping for much of the same this coming Saturday. Kaitlyn and Candice Smart continue to make serious strides in the Ninja Karts and will be looking to continue the good form this weekend. Kaitlyn will be starting from red grade for the first time. Jack Baird is another who has been in excellent form in recent meetings, scooping several race wins in 2019 already – can he had more to his tally this weekend? Or will the Superstars from the back of the grid make enough inroads to prevent him from doing so? Lewis and Aiden Duffy will be starting from the same grade again and will be out to beat each other, as well as scoring as many points as they can.. Nothing quite like a bit of family rivalry on track is there?! Kayden and Jack Connor are another who have came on leaps in 2019, with Kayden winning the B final in the East Anglian Championship last weekend. One thing for sure in this crop of Ninja Kart drivers is that there is no shortage of talent, and absolutely no fear amongst the drivers!

The Superstox have what looks set to be the best turnout of 2019 so far, with 18 cars currently booked into race, including visiting driver Michael Green. Michael has been in excellent form since joining the Superstox formula at the start of the year, and makes his first visit to Lochgelly Raceway as he looks to get in some pre World Final practice. Bryan Forrest and Stuart Gilchrist will be leading the charge from the home front, though won’t have it all there own way. Dean Johnston, Kenny McKenzie and Adam Low have all competed well in 2019 and aren’t afraid to mix it up. Aaron Riddell will be hoping for a turn in fortunes to get his car back on the pace. Derek Kilday has came on well in the formula in recent times and a first win won’t be far away. Michael Taylor looks set to make his first outing in a Superstox this Saturday night.

The Stock Rods feature some of the best in the class here at Lochgelly Raceway, with Chris Lattka and Siobhan Martin having won the majority (if not all) championships between them. A great on track rivalry between the two superstars has provided excellent racing between them over the last few years, with it continuing in 2019. Scottish Champion Ricky White and Darren McAlpine have both shown consistent form throughout the last couple of months, with Gary Dean being in excellent form last time out in his new car. Stuart Bannatyne is expected to make his first outing since his hat trick of race wins at the end of March, whilst Pete Honeyman is also expected out on track for the first time this season. There is no easy race in the Stock Rods, with a lot of on track talent.

The ProStocks are out for the 2nd week in succession. Dean McGill won a hat trick last time out, but isn’t expected to be with us this weekend. Ian Christie has a comfortable lead at the top of the National Points and will be looking to maintain that cushion throughout the season. John Jackson was in good form last week, and will be looking to continue that this week. Lee Kopacz and David Linton join us again after missing out last week. Both of whom will be hard to catch from near the front of the grid.

The Junior Productions look to have another healthy field of cars on track. Koddi Wright returns to HRP after flying the flag for Scotland last weekend in Ireland. Jenna Kirk looks set to make her debut in the formula, with Jack Morrow making the trip across from Ireland to join us on Saturday night.

We’re back next Saturday night with Caravan Carnage at the end of the night where around 8 caravans are expected to be in attendance for a fun filled end to the first half of the 2019 season!