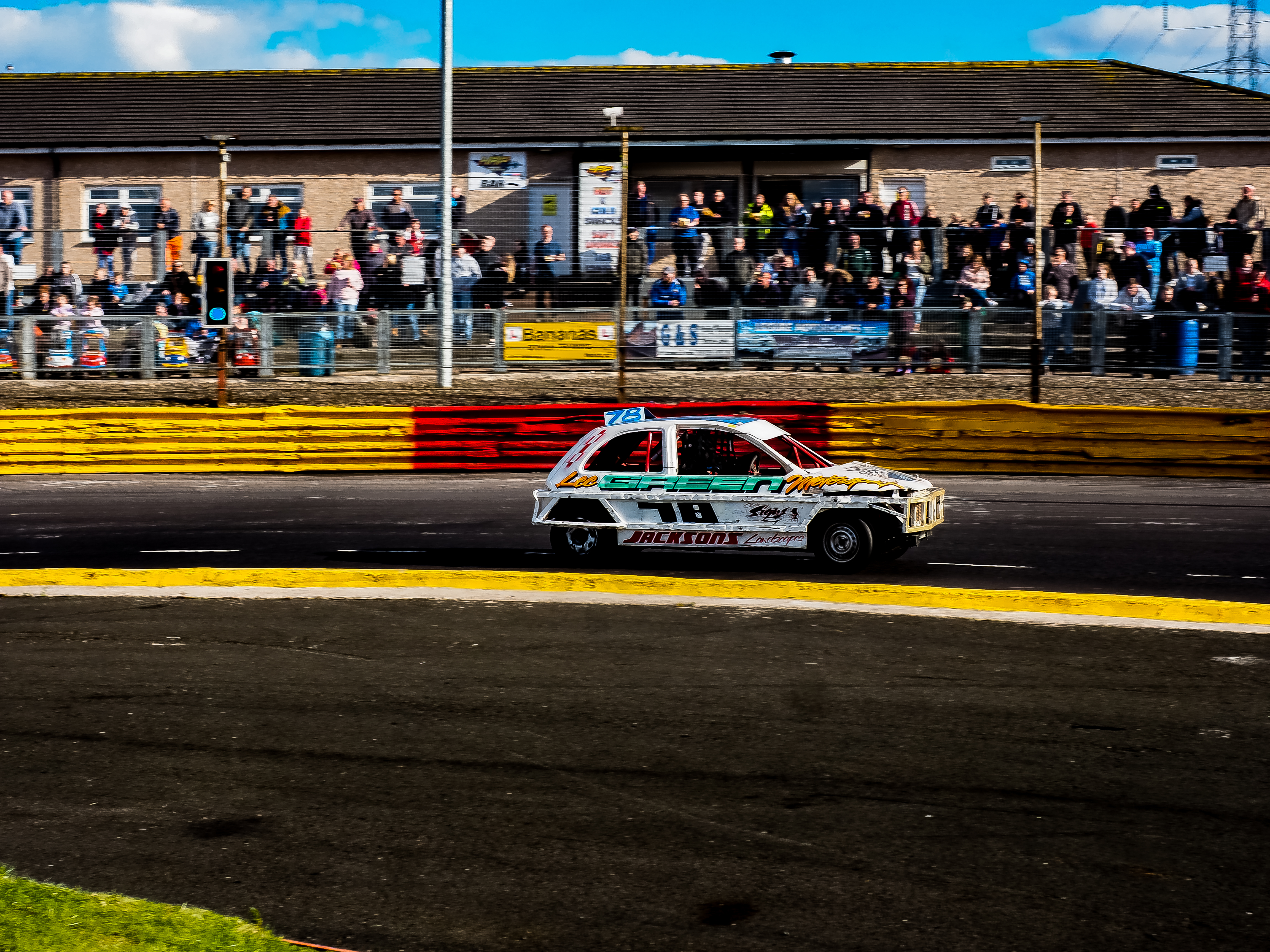 Saturday 18th May
Welcome back to Lochgelly Raceway for another night of entertaining stock car racing!

The 1300 Stock Cars are the formula on the incline at the moment with numbers seemingly increasing meeting on meeting, and this weekend looks no different with 20 cars currently booked into race, its set to be the highest turnout of the season to date for home based drivers. Andrew Mathieson returns to action after missing a number of meetings due to clashing schedules and will be looking to get his car on the pace ahead of the speed weekend in a couple of weeks time (8/9 June). Craig Haxton and Zak Gilmour have been in good form this season, both showing good speed and neither are afraid to use the bumper. Eddie Corr has suffered a dip in form of late, but will be hoping to get things dialled up again this weekend given that it is the last meeting at home before the European Championship. Rory Naismith made his debut last weekend and secured a meeting final win in the process – Certainly one to watch out for. Likewise his brother Sean who has been in good form this year, already up to a blue grade and able to hold his own. Danny Whyte is no stranger to action and is one of the drivers who loves to be involved in the action and will make a lunge for the lower places in the grid – certainly a good driver to watch!! Stewart Aitken and Patrick Calderwood have scored a good haul of points this year, with Stewart being in great form from blue grade but has suffered some reliability issues that has prevented him from being upgraded to red grade!

The CC Rods started off 2019 slowly car numbers wise, but have picked up over the last few meetings and with just under 20 cars booked into race this weekend, its another great turnout for the non-contact brigade. Lee Wotherspoon has been in good form so far, picking up a number of race wins. Lee will be hoping to continue that form this weekend, but like previous meetings, will have a fight on his hands. Ian Donaldson appears to be back to his best and looks to have his car going well again. Ian is no stranger to victory lane and knows his way around Lochgelly Raceway. Paul Muir is another driver who is always there or thereabouts, and will be looking to score a good haul of points this Saturday night. Brandon Gourlay had a nightmare start to the 2019 season but looks to have turned things around in the last couple of meetings, scoring good places and really good pace – A race win looks just around the corner for Brandon! Dale Burt and James McIntyre look set to join us for their first outings of the season.

The 2.0 Hot Rods are racing for the final time ahead of the ATP / JP Fabrications European Championship here at Lochgelly Raceway on the 8th and 9th of June. 15 cars are booked into race including visitor Martin Heath who is looking to find a decent setup of the car before the June Speedweekend. Jim Pitcaithly has been the driver to beat so far in 2019 at Lochgelly Raceway, however, Kevin Stewart and Gerry Hendry have always been around the top 3 places as well. Brian Wilson has found his feet like a duck to water in the formula since starting out in March. Brian has scooped a number of race wins this season already and won from the blue grade last time out, he’ll be hoping to continue that as he vies for a place in the European Championship. Gary Black and Ryan Adamson have both came on well this year and have secured a number of good results between them, with Ryan taking a heat win in a recent meeting. Chas Bain is no stranger to oval racing and has shown great speed from the back of the grid in his meetings so far this season – Once he gets to start from his graded position, he’ll be up there battling for race wins. The 2.0 Hot Rods have been arguably the best formula of the season to date with every meeting providing nail biting racing as the drivers race in large groups as the battle for positions.

Junior Production Stock Cars are in action as the youngsters take to the track again. Koddi Wright was in dominant form last time out, whilst Lennon Grant scored consistently well as he finds his feet in the new car that he is using for 2019. Jensen Bell will be looking to continue his good progress in the formula and will be hoping for an uneventful night after some technical issues last time out!! Jamie Stewart makes his first outing in the formula, and will likely me straight on the pace with his Ministox experience.

The Superstox are the final formula in action and its good to see numbers finally going in the right direction with the open wheel class as well. Stuart Gilchrist was in good form last time out and had some great battles as he raced his way through the pack. Dean Johnston has started the 2019 season in good form too, finding consistency in both wet and dry conditions. Kenny McKenzie has been at his best in the wet this season, but has also shown good speed in the dry conditions. Adam Low looks to have got his zetec powered car going as he likes his, already scooping a couple of race wins this season and a handful of top 3 finishes in the process. Adam is an unpredictable driver and loves a battle and is certainly no stranger to on track action! Bryan Forrest made the trip over the Irish Sea last weekend and came away with a 2nd place in the Tullyroan Cup. David Frame and Jack Turbitt look to join us on the grid this weekend for the first time this season.

There is no racing here at Lochgelly Raceway next weekend due to a major event with our neighbours at Driftland. We are back in action on Friday 31st May as with the Ministox, Superstox, Stock Rods and ProStocks all in action in the final domestic meeting ahead of our 2nd speed weekend of the season!!

Please note, HRP cannot be held responsible for any driver not fulfilling the booking. Running order subject to change. Information correct at time of publication only.